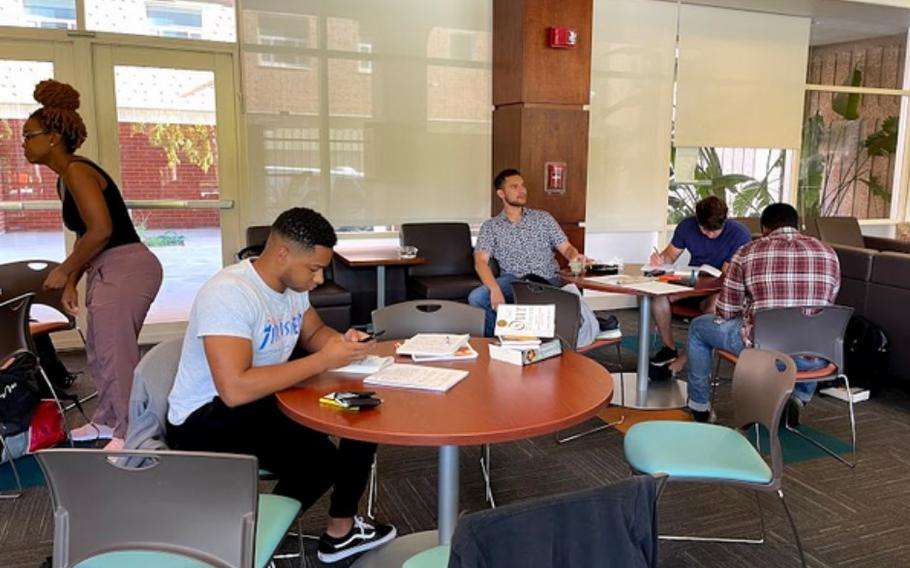 More than 60 veterans have attended a rigorous two-week Warrior-Scholar Project academic boot camp at the UA to learn from faculty, receive mentoring from fellow student veterans and begin to adjust to a formal learning environment.

Navy veteran Victor Chiquete said the Humanities & STEM Academic Boot Camp he took in 2019 gave him the confidence to enroll at the UA where he is majoring in neuroscience. (continued)

WILLIAMSTOWN, Mass. — After eight years on active duty in the Marine Corps, Joseph Grillo was ready for a new challenge.

But he also knew that a college education posed different challenges for veterans like himself than it might for the “traditional” undergraduate.

“It’s not the academics or rigor or the late night study,” Grillo said recently. “It’s the loss of camaraderie, the fear of fitting in. Then COVID hit, and the fear only doubled: What was I stepping into? Was this going to work for me? (continued)

After serving in the Navy for over seven years, Timothy Raiford was planning his next steps. One night in 2019, he typed a question into the Google search box: “How does a veteran go to college?”

When the link to the Warrior-Scholar Project website appeared as a result, he immediately applied — even though it was 1 a.m.

He’s grateful he did. Raiford, now 31, participated in the 2019 WSP program at Cornell and plans to attend UNC this fall as an undergraduate. (continued)

“I had thought that professors are just looking to make sure you regret joining their class,” Ulloa said. “Now, I feel more comfortable in a college classroom. I don’t have to hold back on my thoughts.”

Ulloa was one of 16 military veterans who participated in the virtual academic boot camp at Cornell July 26 to Aug. 6. The university partnered with the Warrior-Scholar Project for the seventh consecutive year to help recent or soon-to-be military veterans transition into higher education. (continued)

For 13 and a half years, Jennifer Aquino served her country.

“I talked to a friend of mine that was also a CTI in the Navy, and she has been going to school, and I’ve been contemplating to go back to school,” Aquino said.

It’s a decision made relatively easy for the decorated Puerto Rico native and Texan living up north. And it’s thanks to a program called the Warrior-Scholar Project. (continued)

While most college first-year students are recent high school graduates, for some, higher education follows military service — leading many veterans to struggle with adjusting to the college experience after years spent away from the classroom. In an effort to help student veterans acclimate to civilian life and successfully complete undergraduate programs, Columbia University has partnered with national nonprofit Warrior-Scholar Project (WSP) to host a Humanities Academic Boot Camp from August 1-6. The intensive curriculum, offered at no cost to enlisted service members, is designed to help veterans prepare for an academic environment while learning strategies to become better students. (continued)