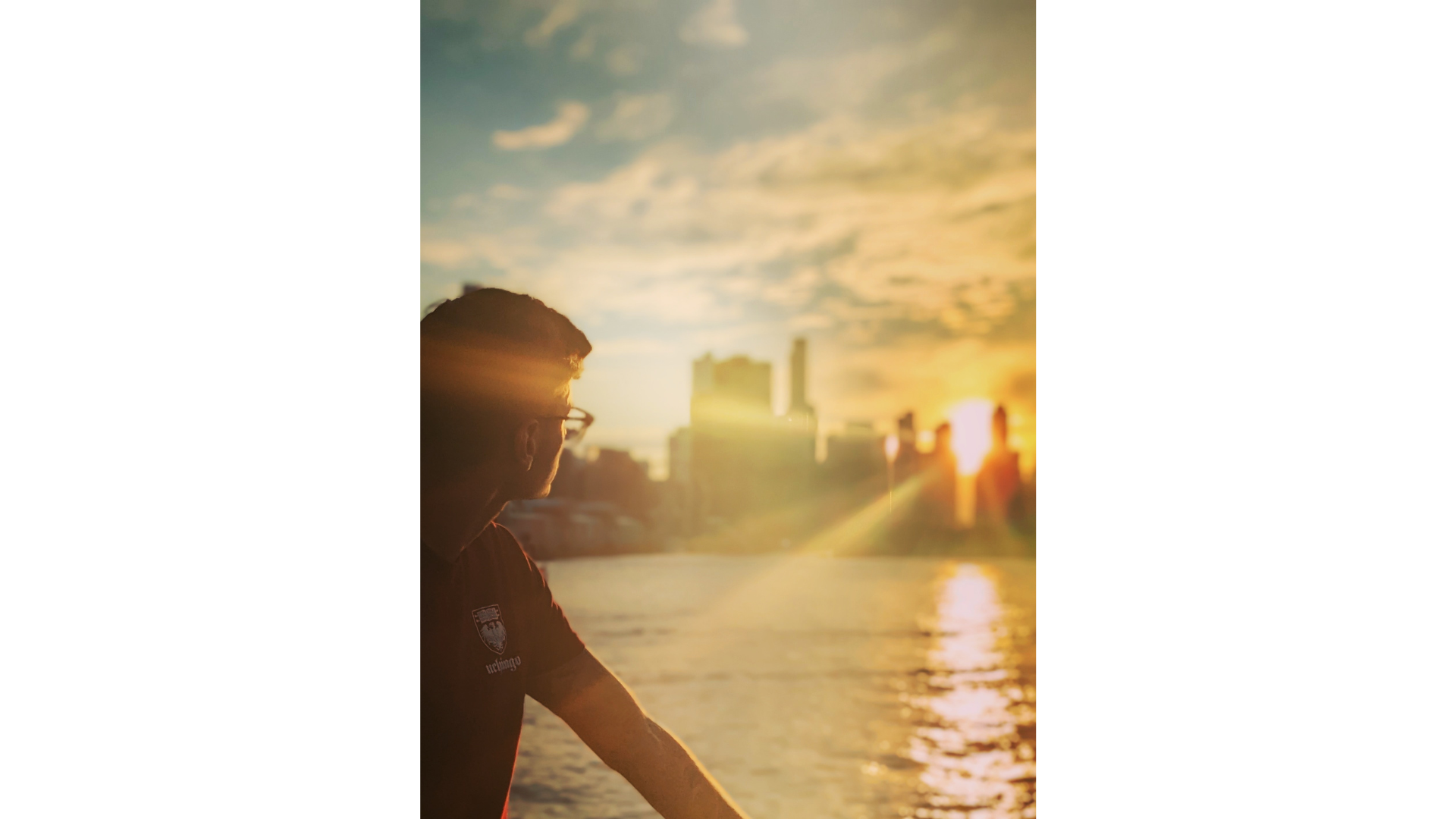 I am from Kherson, Ukraine, but I moved to the U.S. when I was 10. I grew up in Tucson, AZ, and decided to join the Navy after high school. I chose the Navy over a full-ride scholarship to the University of Arizona because I had a strong desire to give back to the country that saved my life. America welcomed me with open arms and provided opportunities I wouldn’t have otherwise had.

I was a Fire Controlman First Class aboard the guided-missile cruiser USS Antietam. Specifically, I worked on the computer equipment used to process ballistic and radar targeting data, which our ship’s weapons systems used. I also joined the ship’s “flying squad,” which was the rapid response team handling damage control while underway. Despite being promoted to E-6 after four years and being on the fast track to E-7, I decided to separate from the Navy to pursue higher education at the University of Chicago.

I consider meditation fundamental to my identity, I’ve been meditating for nearly a decade and can confidently say that it has been nothing short of a software upgrade for my mind. I learned mindfulness from Theravada Buddhist monks in Tucson and reinforced my understanding by attending a silent Vipassana meditation retreat in rural Japan. I have also continued my practice with help from Sam Harris’ app “Waking Up.”

I attended a nationally ranked public college preparatory high school and then took online classes through Arizona State University while working 80 to 100-hour weeks throughout my enlistment. About halfway through my contract, I learned about Service to School and the Warrior-Scholar Project, both of which inspired me to shoot for the stars. I applied for Warrior-Scholar Project and attended the humanities and business & entrepreneurship boot camps at the University of Southern California.

A year from the end of my service obligation, I applied to the University of Chicago through their unique rolling admissions option for veterans and was admitted three weeks later. Securing my future ahead of time was important. As one of the most knowledgeable sailors aboard the ship, I gave my full effort until the day I walked off the brow for the last time. Because I did so, my commanding officer granted me nearly 90 days of leave, allowing me to make it to Chicago on time to attend school. My advice to people nearing the end of their service is to finish strong: give yourself something to be proud of.

Although I had already secured admission to one of the country’s best colleges, I attended WSP because the organization had inspired me early on in my journey. I didn’t have a chance to participate while in the military due to being forward-deployed throughout my service and was excited to have the opportunity to attend an academic boot camp at USC before starting classes at UChicago in the fall.

Additionally, I wanted to meet like-minded veterans while tapping into one of the best alumni networks in the country. I figured that veterans attending WSP would be among the best & brightest our services had to offer, and I was not disappointed. They were some of the most motivated and inspirational service members I’ve ever met!

I came into WSP fairly confident in my ability to succeed in the classroom and knew that I could learn anything through hard work. My confidence level remained high; however, I was humbled in the sense that I understood the importance of being able to triage assignments and plan rest. Most days, I studied from 7 am until midnight, which would’ve been unsustainable had I not triaged the unimportant. As UChicago has a notoriously rigorous curriculum, I’m glad to have learned that skill in a setting that doesn’t impact my official academic record.

I already touched on this, but I can’t overemphasize the importance of understanding your key priorities. It could be getting a perfect score, clarifying your thoughts, networking, or any number of other possibilities. Let me be clear: you can do anything, but you can’t do everything.

Another important insight was the value of Socratic discourse. In the military, philosophical discussion as it pertains to the mission is either one-sided or curt. In an academic setting, it’s perfectly fine to talk about something with no end goal in mind, and it’s okay to speak to clarify one’s thinking or to challenge an idea that seems shortsighted or misinformed.

I also learned that it’s okay to ask for help and that it’s okay not to have all the answers. Both can be frowned upon in a military setting, especially when one is in a leadership position. In the classroom, those who are willing to be vulnerable are the ones who learn the most… and those who learn the most are the ones who succeed in their studies.