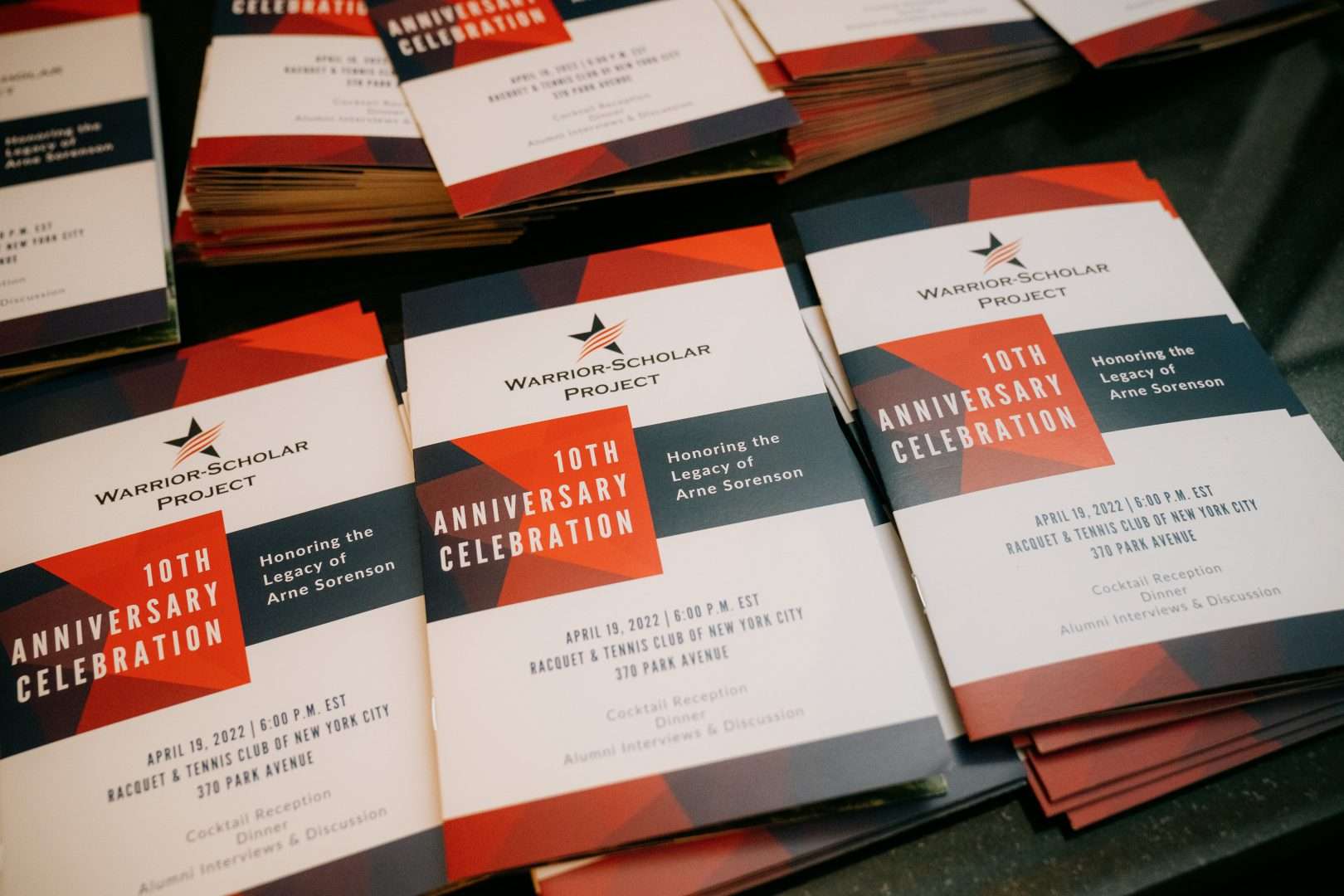 Nearly 2,000 lives of enlisted military veterans changed — that’s the impact national nonprofit Warrior-Scholar Project (WSP) has achieved since its inception in 2012. Founded with the vision to ensure that every degree-seeking enlisted veteran succeeds in their pursuit of higher education and beyond, WSP is thriving in that mission 10 years later. The 10th anniversary celebration raised nearly $700,000 that will go towards helping veterans as they transition from the military to college.

The evening featured a tribute to longtime WSP supporter and board member Arne Sorenson, the late CEO of Marriott International. Attendees also got to hear from keynote speaker David Rubenstein in addition to hearing firsthand from many successful student veterans about the WSP experience and its impact.

While seating was limited at the event venue, those who could not attend in person watched online, which allowed many alumni, parents of alumni, academic partners and professors, stakeholders from host institutions, foundation and corporate sponsors, and other supporters from all around the country to stream live.

Ryan Pavel, WSP’s CEO, shared how far the organization has come and expressed excitement for the future. “Ten years ago, WSP was just an idea by a few college students at Yale. They came together and recognized the need for enlisted service members to get this type of preparatory program on their way to college. They started with a group of nine students, and today we’ve served almost 2,000. We started with one campus partner, and now we have 24 throughout the country.

WSP is all about equipping service members and veterans on the enlisted side to excel in higher education and beyond. We’ve been doing it for 10 years and have a tremendous amount of growth to do in the coming years. We really hope that you’ll join us in that journey and find a way to plug into our community.”

The evening kicked off with remarks from WSP Chairman Mark London, who shared compelling excerpts from interviews he conducted with program alumni as part of an ongoing project to share their stories with the nation. His remarks concluded with a short video highlighting WSP alumni and their accomplishments.

Harry Foster, a Marine Corps veteran who attended WSP’s 2019 academic boot camp at Columbia University, where he is now a student, shared, “I didn’t take school seriously, I thought it was a joke. WSP helped me manage how to balance out my class schedule better, how to manage my time better, how to study better. My very first semester after WSP, I got straight A’s. I told my dad to put it on the refrigerator, I thought it was pretty cool.”

Air Force veteran Timothy Bang, who attended WSP’s 2021 academic boot camp at the University of Chicago, shared, “Transitions are hard. When veterans make the initial transition from civilians to military, we all went through boot camp together — it wasn’t an individual feat. And so when making that transition from veterans to a student, that first step being with fellow student veterans really helps set you up for success.”

More than 30 veterans were featured, and they overwhelmingly said that WSP is empowering, transformative, and life-changing, and that the program gave them the confidence to succeed in the next chapter of their lives while offering a support system during the transition.

The fundraising event was in tribute to one of WSP’s most stalwart supporters, the late Arne Sorenson, CEO of Marriott International and WSP board member. Arne taught one of WSP’s humanities courses every summer until his passing in 2021. Pavel said Sorenson was servant leadership personified, “We didn’t have to ask him to schedule that time on his calendar — he would reach out to us every single summer.”

Arne’s legacy lives on through WSP’s Arne Sorenson Seminar Series, an opportunity for business leaders and military government officials to lead discussions on materials the way Arne did, with a focus on humanities curriculum and the foundations of democracy, its evolution, and the importance of its preservation.

“We’re hoping that other men and women will appreciate what it is that WSP is doing in the way Arne did and come into the classroom with the same enthusiasm and humility,” said Mark London, WSP’s chairman of the board and longtime friend of Sorenson.

The event concluded with a keynote address by David Rubenstein, businessman and co-founder of the private equity firm The Carlyle Group. Following his speech, Rubenstein sat down with WSP alumni Jessica Nelson, a Marine Corps veteran, and Michael Bollinger, an Army veteran. Nelson and Bollinger spoke about their experiences in the military and why they decided to pursue higher education upon separating from the service.

Bollinger, a Purple Heart recipient, served as an Army Ranger and deployed to Afghanistan and Syria. Today he is majoring in computer science at Columbia University with plans to become a software engineer upon graduation. Bollinger designed WSP’s Python Primer course, which was introduced to the program’s STEM curriculum in 2021.

Nelson served as a Geospatial Analyst and graduated from Smith College in 2019 where she majored in psychology and community engagement. She is currently attending law school at the University of Michigan and is the first WSP alumnus to sit on the organization’s board of directors. Nelson ended the Q&A session by noting that “Warrior-Scholar Project is the best decision I ever made.”

Warrior-Scholar Project is proud to help enlisted veterans achieve success in higher education and beyond, but we couldn’t do it without the generous support of our donors and supporters. Make a difference in veterans’ lives and donate to our mission today or discover other ways to help us continue to serve veterans.